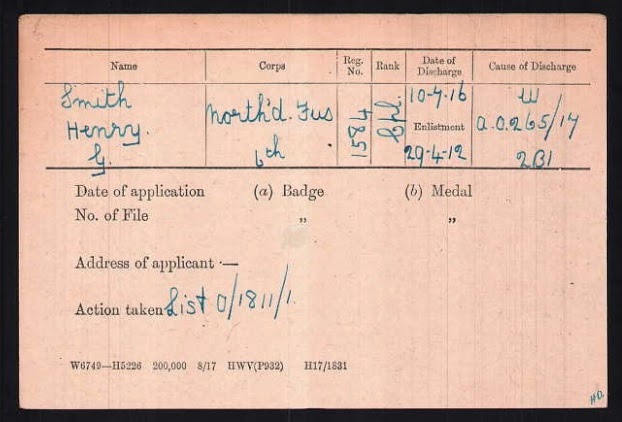 1584 Corporal Henry G Smith of the 6th Northumberland Fusiliers was a patient at Hickwells in 1915.  His entry in Nurse Oliver’s album was originally written in pencil but has been heavily overwritten in black ink at a later date.  It reads: 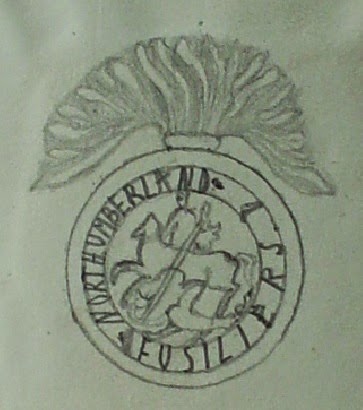 
1584 Corporal Henry G Smith was born around 1892/1893.  He joined the territorial 6th Northumberland Fusiliers on and sailed with the battalion when it arrived in as a complete unit on .  Just five days after arriving, he was wounded at St Julien.


Henry Smith was discharged on as no longer physically fit fro war service.  He was 24 years old and had served for around one week overseas.


At the time war was declared, the 1/6th Northumberland Fusiliers found themselves in the Northumbrian Division, one of fourteen as yet unnamed territorial divisions.  When it arrived in in April 1915 it became the eighth complete territorial division to sail abroad but it was not until the following month (by which time Smith had already been wounded and sent back home) that it got its official designation as the 50th (Northumbrian) Division.


After a calm journey across the Channel, the 1/6th Northumberland Fusiliers spent their first night under canvas at a rest camp outside .  The following morning they had a brisk three mile march to Pont du Briquet and then picked up a train which had deposited them at around .  There they had de-trained and marched the five miles to Winnezeele, arriving there at and immediately billeted in scattered farms north and south of the village.  They spent the rest of the day there.  The following day, Day, they left their billets at and marched off towards  Brandhoek at , covering the eleven miles in four and a half hours.  There, with the rest of the brigade, they took over the GHQ 3rd line trenches either side of the Ypres - Poperinghe Road and remained there until 3.45pm on the 24th when they were ordered to move via Ypres to Potijze to form a Corps reserve.  At on the 25th the brigade arrived at Potijze cold and wet through from the rain.  They’d been shelled while passing through and had already suffered casualties.


The following afternoon, the brigade having been placed under the command of the 1st Canadian Division, they received orders to attack St Julien village through the lines of trenches held by the 4th Division.  They would be accompanied by the Lahore Division and they would be the first Territorials to go into action as a Brigade.  At they attacked in two lines but the situation was hopeless.  As soon as they left the ruins of the village they were met by a hail of fire; shrapnel shells at first and then rifle and machine gun fire.  Extending into open order the men advanced in rushes as they had been trained in .  But this wasn’t and St Julien was an unforgiving training ground.  In the men had trained in light battle order but here they were still in marching order with a heavy pack that included a greatcoat, full ammunition pouches and an extra bandolier.  Over-burdened, running as best they could over the shell pocked ground they made easy targets for the heavy artillery and machine guns situated in nearby Kitchener Wood and the casualties soon began to mount.  The men managed to advance about a mile but it was no good.  They got to within 500 yards of St Julien village and there they halted.  Without artillery support and with no prospect of reinforcement, further progress was impossible.  They were ordered to remain until dusk when they were withdrawn to the trenches held by the 4th Division.


Later, as the war progressed, and drafts of replacements filled the gaps left by the original 1/6th Northumberland Fusiliers Territorials, the battalion war diarists would have neither the time or the inclination to list casualties sustained by other ranks.  In the early days though, it was different.  Smith gets a mention along with many of his comrades in a list that fills eleven foolscap pages of the battalion’s war diary:


The war diary for the 149th Brigade reads as follows:


- (HQ)
Left under orders to embark for .  Arrived @ and marched to ST MARTIN Rest Camp.


Orders issued for the Brigade to move to BRANDHOEK via WATOU and POPERINGHE.


Brigade arrived at BRANDHOEK and took over GHQ 3rd line trenches astride YPRES-POPERINGHE road.  4th and 7th Battalions North of Road, 6th and 5th Battalions South of Road. HQ billeted at Farm House 3 miles east of POPERINGHE on the .
24th April -
Orders received from 5th Corps for Brigade to move via to POTIJZE where it will form a Corps reserve.

Orders issued for move to POTIJZE.  Movement to commence at .

Brigade placed under the orders of GOC 10th Inf Bde and ordered to move to WIELTJE in support of 10th Bde.

Brigade arrived at WIELTJE.  Orders received to send one Battalion to GHQ line EAST of Farm in C22t

6th ordered to proceed to GHQ line where they remained until dusk.

The Brigade was placed under the orders of the GOC 1st Canadian Division as Reserve.

Units ordered to leave their positions and bivouac for the night just south of WIELTJE.  No casualties occurred this day in the Brigade.  Weather fine.
26th April - WIELTJE

Report received from 10th Brigade that enemy were endeavouring to break through the line in D13 cd and ordering North.  Brigade to verify and counter attack with whatever force considered necessary.

5th sent to verify report and to counter attack if necessary.  From information received, this BN reached FORTUIN but could get no further.  No signs of the enemy breaking through were observed.  The Battalion dug trenches in and remained in the trench until dusk when they were withdrawn by order of the Senior Officer in the trenches.

Units commenced to retire from front line trenches being no longer required.


3 The 6th will move off at once and advance with its right on the WIELTJE-ST JULIEN road.  The 4th will move with its left on the WIELTJE-ST JULIEN road and will divert.  The 7th Bn will follow the 4th .  The frontage of each battalion will be approximately 300x.  The 5th will remain in their present position.  An artillery bombardment will commence at and be continued until during which time the Brigade will advance.  At rapid fire will begin and continue until after which the assault will take place.


4          Dressing Station will be established SOUTH of WIELTJE village.


Issued verbally to OC Units at


The War Diary of the 50th Northumbrian Division gives the following casualties:

Soldiers' medical records from MH 106
Images and transcripts relating to over 930,000 soldiers treated as casualties between 1914 and 1918. Accept no Forces Poor Records substitutes.
Widows pensions 1914-1920
A sad collection of just under 10,000 records in PIN 86. These women were all widowed during the First World War.
WW1 Pension & Service Records 1914-1920
Search WO 363 and WO 364 in a single search on Findmypast. Contains c400,000 results not found on Ancestry.

Soldiers Died in The Great War 1914-1919
Essential record of WW1 British Army deaths. Most records for other ranks give place of birth, place of residence and place of enlistment details.

Bond of Sacrifice: WW1 officer casualties
Biographies of British Army officers, many of these including photos, up until June 1915.

De Ruvigny's Roll of Honour 1914-1924
Biographies, many with photos, of over 26,000 WW1 casualties.
Royal Artillery attestations 1883-1942
An incomplete collection of attestations for the Royal Artillery. The vast majority of these entries are for the period 1919-1942.